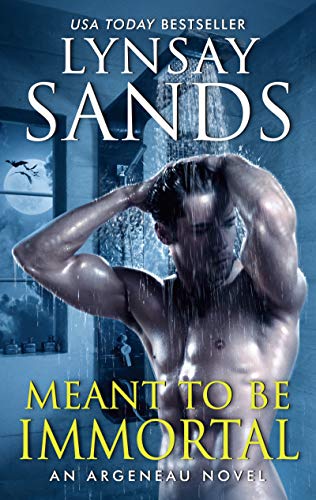 Meant to be Immortal
by Lynsay Sands

When a female agent with the department that investigates bad police officers goes on a case to a small town in Ontario, she gets way more than she bargained for and then some. She gets involved in an attempted murder and since the police department has lost it’s only detective she’s suddenly doing double duty. The big part of her duty is to guard the almost victim of murder in the form of Mack Argeneau-also known as one of the Argeneau family of vampires. When he realizes he can’t read her mind or compel her, he pretty much knows she is his mate. The delight for me as in every one of these books is seeing how the couple is going to meet and fall in love.

C.J. is an investigator that needs to interview a police officer in the small town of Sanford. Mac is a hematologist that works from home, who has just moved to Sanford the same day that someone decides to burn down his new home. Anybody else would have died but since he is a vampire, he starts healing at the scene thanks to all the emergency personnel there. Not because they are working on him, instead because he has to have their blood to heal. These vampires can compel and change people’s version of events. That is, until he meets C.J. and realizes she won’t be helping him to heal. For her part, she can’t figure out why the emergency people are acting so weird. And she doesn’t trust Mac one bit. Which doesn’t make things any better when she ends up having to guard him at the bed and breakfast she’s staying at. Meanwhile, she’s also needs to find out where the policeman she’s trying to interview is and why he’s avoiding her. The police chief seems to be actively keeping C.J. from finding the officer.

I liked C.J. a lot. The reader finds out that she’s had a tough time of it for awhile now and feel for her. She’s very professional and wants to do her job well and leave. Mac has been alone for a really long time. It’s hard for vampires to meet their actual mate and some never do, so it’s a big deal that he’s found C.J.. For C.J.’s part, she’s just fallen into lust, at first anyway. Of course, in this world building, vampires aren’t known about. They were never dead and were changed by their government to help with good health and longevity. It takes blood to do this. And by the way, that government is from Atlantis before the fall. Normally they don’t drink from humans, instead they have control of blood banks that fulfill their needs. As Mac was almost dying, he had to drink to survive.

A lot happens in this book. She’s working on keeping Mac safe(she thinks),while he’s actively thinking of ways to keep her there with him. The mystery of where the policeman is and why she can’t find him is happening and how does the police chief fit in all this is as well. The mystery of who burned the house down has to be figured out too. People from other books show up to help Mac and I always love that when it happens. In fact, if I haven’t read their books I go looking for them when I can. On top of all that is the romance. And humor-there’s usually humor in these books and they are just fun reads that keep me coming back for more.

We are now at book 32 of this series and the high number doesn’t bother me a bit. Instead, it just means more of these books for me to get to read and enjoy. I have been reading them totally in the wrong order and it hasn’t hurt my enjoyment one bit. I think this is the only book series I’ve ever felt that way about. Each book is one couple’s story and it doesn’t continue to the next. You may see the couple again in other books, but they aren’t the main characters again. I always recommend this series to adult paranormal romance readers. Just keep in mind, some of these books are light and fun and others have danger and even evil happenings at times. Good read!

Afternoon Delight: In Still Darkness by

Review: Written on My Heart by Tracey Ja

Review: Hour of the Lion by Cherise Sinc

Ha! Love how he gets her to stick close so he can have a chance with her. This is a series I need to start at some point.

It’s a fun series. My first one is still my favorite. It is titled Runaway Vampire and is book 23. I was hooked almost immediately. So I recommend that one as well.

glad the series can be read in any order, because it surely sounds like one i would love too
sherry @ <a href=”http://www.fundinmental.com/”> fundinmental</a>

I always love getting a new one because I know my interest is not going to lag.

I’m glad you liked this one too. I really enjoyed it.

They are fun books to read aren’t they? I enjoyed reading your thoughts today about it.

I really love the idea of this one! Such a fun premise and a unique take on a vampire story.

Yes, I love the Atlantis premise and very unique.

One day I will dive into this series..lol

I think you might really enjoy them. I just realized recently that my library overdrive has a lot of the ones I still need. I’m glad I started with one that had a lot of adventure and a thriller aspect. Book #23.

I saw another review of this book and was impressed that the series was carrying on.

Yes, and she’s writing other series as well.

I read some of the first books in this series but haven’t read any further. Good to know that I am safe to jump around if I want. This does sound like a lot of fun.

I went back and read a bunch of the early ones too. Those are the lighter ones for me. I like them, but her later books have more things going on and aren’t as light.

Yes, she’s very prolific. But, you can read them in any order without any problems.

Back in the day when I was seriously addicted to vampire love, Sands, along with a few others were my all time faves. Her stories always made me smile, and I was hooked for sure. Good to see that she’s still going strong. Hugs, RO

I used to review twice a week for Rabid Reads before they closed down. So it was paranormal/urban fantasy everything and I’ve read way too many vampire books. Now I just continue to read some favorite authors and series of that genre from back then in addition to lots of other kinds of books. Thanks for dropping in!

Great Review you have here Lorna. I have found that I have enjoyed many of the elements that this author shows to us here. And I still love it after 30 plus books haha they are just fun and I adore the world.

Lorna
Reply to  Lover of Romance

They are very fun. I’ve actually read at least 3?since this one including the arc for the new one in September.