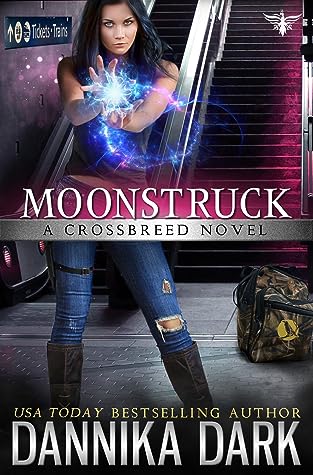 Anytime I can lose myself in a book by Dannika Dark is a win for me. Moonstruck was certainly a home run this time. Raven Black is back, along with her lover, Christian Poe, and they are smack in the middle of a dangerous and very exciting adventure. Raven and Christian are the delight here as they have been from the beginning of this amazing paranormal series.

Moonstruck is the seventh of Dark’s Crossbreed series and I can honestly say that it is still going strong with each new installment. Here again, as with the last one, I think this is one of my favorites of the series-there are so many of this series I can say that about however.

Raven and her motley crew of crime fighting cohorts are embroiled in a mess that is so top secret that they, as the participants, weren’t even in on the secret until they are well on their way to a top secret destination. Not all members of Keystone(the name of the group that employs them)have been able to come this time. Also on the trip are Shepherd, a relic/sensor, Claude, a chita, Viktor, a wolf and the head of Keystone, Niko, a mage, and Blue, a falcon. Each brings a different skill or gift to the table and they need it because they have very precious cargo to deliver. Left back at home in the city of Cognito are Gem, a mage, Wyatt a gravewalker, and Switch a wolf, and Hunter, Shepherd’s little boy. Instead of there just being one main story going on, there’s another crisis back at Keystone, which just made the story even more suspenseful.

Even though there’s been seven books now, we are still learning characters back stories and that’s always a welcome addition. This time around, we also revisit breed details first mentioned in Dark’s Seven series. I like how all of her books center around the same world building without being part of the same series necessarily. Occasionally we see a glimpse of something from a previous book and I always enjoy that as well. This one even had a reference to someone from Dark’s Mageri series-still my favorite of all of the series. That’s saying something as I have loved all the books in all the series.

Over and above the wonderful world building, is Dark’s characters. You never come away from her books trying to remember who is who since they are all so well realized and all make an impression-right down to the housekeeper that doesn’t speak English at Keystone. Perhaps the best fleshed out are Raven and Christian. Raven is young as far as immortality goes, is both a vampire and mage, and started out at Keystone as a homeless woman with a bit of a chip on her shoulder. Now though, she has shown herself to be warm and even witty at times with a pretty big heart. She has really grown so much throughout the series. She’s still a monster killer, but one that loves the people in her life. Which brings me to Christian. First met in the Mageri series, you either loved him or were ambivalent towards him. He wasn’t my favorite, I admit. Now after all this time, I love this Irish vampire. His love for Raven has opened himself up the world(and to us) in ways that he hadn’t been until he met her. Their romance has been fraught with danger at times and was also forbidden as well, but now they are happy and I so enjoyed that immensely. Of course I have other favorites as well, Gem and Niko in particular.

Read these for the romance, the paranormal features, the adventure or the suspense, but just read these if you are able. You won’t be sorry. Me? I’m just going to be hanging out waiting for the next one! Recommended to adult paranormal romance/urban fantasy or even romantic suspense fans. Amazing story as always!

FYI-These books are wonderful on audio with a 5 star(my rating) narrator in Nichole Poole. I’ll be buying mine soon,

Review: Even White Trash Zombies Get the

Review: Of Flame and Fate by Cecy Robson

Review: Winging It by Sandra Sookoo

Oh yes I really want to try this series as well!

It’s amazing. All of her series.

I really like this kind of book and I plan on trying this author at some point.

I think you would like these Mary! Any of her series actually.

I love when a series continues to develop the characters throughout each book and when the side characters are also able to make an impression on me. This sounds like a great series!

One thing about Dannika Dark pretty much every character she writes stands out. I hate it when side characters are interchangeable.

It’s the perfect way to describe most of the group. All are so different.

I’m still working on getting caught up on this series. I can’t wait to get to this one.

They just keep getting better I think. Enjoy!

My question is… when have you ever NOT lost yourself in a Dannika Dark read! You have been telling me for years to read her work… This sounds like another fabulous read, and I think you had me at Irish Vampire!!

Never haven’t. Of course, she’s my favorite author but even so, she’s never let me down. Not once. I wish you had a chance to try her. I think you would understand my feelings.