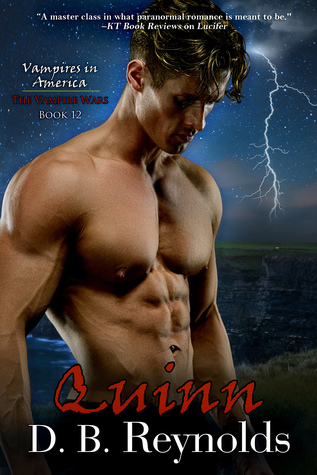 Hot vampire lords and feisty heroines inhabit this fascinating world that D.B. Reynolds has written and I’m addicted to the whole series.

Eve Connelly is an Irish redhead with the temperment that seems to go with it. In this case, she deserves to be angry after seeing her brother beaten to death by two vampires. She vows then and there that all vampires she can find will die at her hands. She pretty much gives up her life, which used to include graduate school, to hunt at night when the vampires are out and about. Quinn Kavanagh has just moved back to the land of his birth, Ireland. There’s a vampire war going on and it’s Quinn’s turn to take over a territory and this time the territory is Ireland. He runs into Eve one night when he watches her lure a couple of vampires to their death. Immediately, he makes the decision to find out what she’s doing and why. And hey, if he’s attracted to her and her to him, well that can’t hurt things, or can it?

There’s just so much to love about this series. It may be about Vampires in America, but now that’s expanding to include Europe and the UK. Reynold’s world building is amazing. She writes of a world where vampires are known about and even feared by some. But there’s also a part of the population that are drawn to vampires and more than willing to give up their blood for the feeling they get while doing so. Other than that, vampires are very private and keep their politics to themselves. They also keep their wars to themselves.

The world building may be my favorite thing about this series, but her characters are my other favorite thing. This time Reynolds changed things up a bit. In past books most of the heroines have been strong females with a hardcore job. This time, Eve is feisty as they come, but really has no real job-at least not a legitimate one. She’s also quick to jump into the physical part of the relationship, when the others have more of a slow burn type romance. Of course, she has no idea he’s a vampire and those other ladies did. As I mentioned, she hates vampires and won’t ever have anything to do with them-until she kills them. Yeah, that’s not happening this time. On Quinn’s part, he’s smart, built like a Greek god and determined that Ireland will be his. He was born as one of the few powerful vampires, but like anything else, it took time to hone his powers. And grow stronger while establishing his own small army of vampires.

Vampires in America is one of those series that I have been moving through, slowly but surely. I actually read this one out of order for the first time, but since I had read the first eight it wasn’t a problem for me. These books always have fantastic main characters and plenty of life and death action. The romance is always hot with mega chemistry and I always look forward to the vampire’s backstory. In this case, it only goes back fifty seven years, but it was still compelling. The only problem I had this time was with some out of place or I should say time things. At one point, Quinn is on his cell phone-fifty seven years ago. And he calls his cousin, also a good character, the word, dude. Both things jumped out at me while reading. I will say, I’ve never noticed anything like that in this series before and since this is an ARC, hopefully it was corrected before publication.

If you like vampire stories, ones with lots of romance and action, then this is a series not to be missed. Highly recommended!

Review: Dawn of a Dark Knight by Zoe For

Wicked Ever After by Delilah S. Dawson #

I love the cover and the whole vampire/romance thing is so intriguing to me. Great review!

These are intriguing, especially the Raphael ones. He’s book one and several others as well. Thank you!

oh vampires! I don’t read a lot of vampires story anymore I confess

Yeah, they used to be big, but then I wasn’t reading them for a long time so I am still catching up with reading some of the big series.

I love vampires but I didn’t care for this book much. I reviewed it last month and think the romance kinda got lost in this story. Glad that you liked it though.

I have book one, Raphael, thanks to you Lorna. I am glad Quinn was so good. I really need to start them sooner, rather than later.

I actually think you might enjoy them Kimberly. This wasn’t the best of the series for me, but I still liked it.

This gives new meaning to complicated relationship. LOL I will start these at some point.

This wasn’t my favorite of all of them-I usually give at least 4.5 stars or better for these. But still was a good fast read for me.

Fun! It’s been YEARS since I’ve read about vampires.

Karen @ For What It’s Worth

This sounds right up my alley. I enjoy great world building and character development. Glad to see you are enjoying. I’ll have to check out this author and series. Thank you for sharing.

This sounds like my kind of read. And It’s been a while since I read a really good vampire story too. Great review!

I love a good vampire story. I haven’t read this series but it sounds like I need to check it out. Glad you enjoyed it!

This has been the kind of series that I know I am going to enjoy the book on lots of different levels. Thanks!

I enjoy vampire stories and this sounds like one I would love. Thanks for sharing.

It has been a long time since I read a good vampire book. This sounds like a series I would really enjoy!

It really is a good series. Lots of action and romance. I think you might really enjoy it 🙂

Great review. I also liked this one (not my favorite) but the world building and suspense was my favorite part. 🙂

Lorna
Reply to  Lover Of Romance

I agree, it wasn’t my favorite-I usually rate them 4.5 or 5 stars.The romance this time wasn’t as good but I still liked the book.