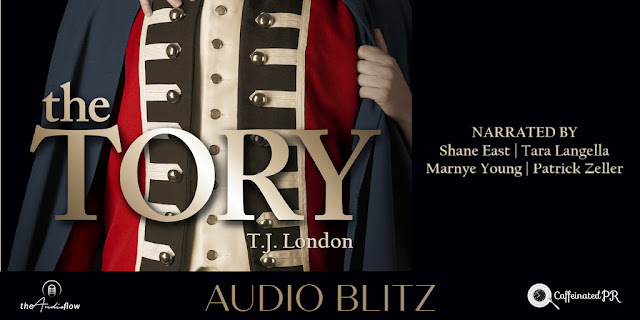 THE TORY written by T. J. London and narrated by Shane East, Tara Langella, Marnye Young and Patrick Zeller is now available for audio everywhere! Listen to a sample and enter to win The Tory Prize package.

The first in The Rebels and Redcoats Saga this historical tale has suspense, war, romance and more. 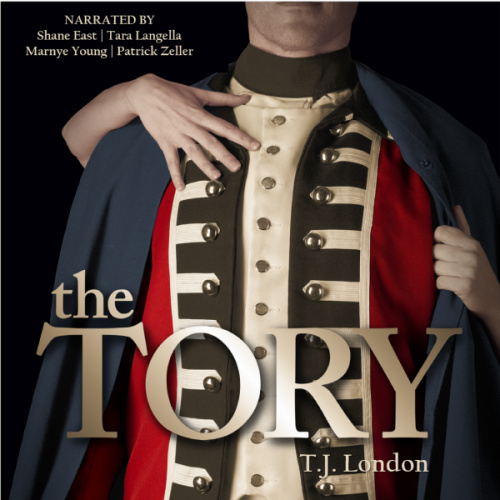 His King or His Conscience…which will he choose?

It is the winter of 1776, and Captain John Carlisle, one of His Majesty’s not-so-finest, has gone back to the scene of the crime to right a wrong so dark it left a permanent stain on what was once an illustrious career and left a man broken, defeated, in search of justice…

In an effort to win back his commission, he must discover the true nature of the relationship between the Six Nations of the Iroquois and the Colonial Army. Undercover as a war profiteer, John travels to the treacherous Mohawk River Valley and infiltrates local society, making friends with those he’s come to betray. But a chance meeting with a beautiful half Oneida innkeeper, whose tragic history is integrally linked to his own, will provide him with the intelligence he needs to complete his mission—and devastate her people.

Now, as the flames of war threaten to consume the Mohawk Valley, John has the chance to not only serve King and country, but to clear his name. When the truth he uncovers ties his own secrets to those in the highest positions of the British military and threatens the very life of the woman he’s come to love, he will be forced to make a choice…

caffeinatedpr · The Tory by TJ London T.J. London is a rebel, liberal, lover, fighter, diehard punk, and pharmacist-turned-author who loves history. As an author her goal is to fill in the gaps, writing stories about missing history, those little places that are so interesting yet sadly forgotten. Her favorite time periods to write in are first and foremost the American Revolutionary War, the French Revolution, the French and Indian War, the Russian Revolution and the Victorian Era. Her passions are traveling, writing, reading, barre, and sharing a glass of wine with her friends, while she collects experiences in this drama called life. She is a native of Metropolitan Detroit (but secretly dreams of being a Londoner) and resides there with her husband Fred and her beloved cat and writing partner Mickey.

Review: The Heart of a Texas Cowboy by L

DNF Reviews – The uh no way!

Review: In Want of a Wife by Jo Goodman
Subscribe
12 Comments
Oldest
Newest Most Voted
Inline Feedbacks
View all comments

This sounds so fascinating, and I’d love to meet the author. She sounds like such a fabulous person to know and hang out with! Hugs, RO

I think so, too. Can’t wait to start her story. 🙂 Great that you could drop by, Radiant Ro!

Sophia, Thank you for hosting today! I hope you love THE TORY as much as I did!

Our pleasure! I’ve got two more audio arcs and then I get to dive in. Can’t wait! 🙂

T. J. London is a new author to me, but I look forward to reading this. I always love meeting new authors. Thanks to this blog for the introduction.

It’s exciting to try new to me authors. Thanks for your visit, Audrey!

I cannot wait for the next audio and it looks like all of the narrators have signed to do it!!

Now, that is good news. I love that type of continuity for audiobooks.

Fun post with a cute mask ;-). Loved how the author got into costume!

I agree. It shows her love of her story world. You can read her interview over at Debbie’s The Reading Frenzy. 🙂